“They Tame Lions in That League”

Yesterday, our time contraption piloted by C.L.R. James took us to 1932 and a Nelson v Accrington match in the Lancashire League.

The Nelson professional, Learie Constantine,  is facing the late in-swing and perfect control of Accrington’s pro Ted MacDonald.  Ted’s bowling has been nothing short of spell binding.  The Nelson crowd sense that at any moment, their professional will explode.

A length ball straightens, pops and the ball flies from the shoulder of Constantine’s bat looping towards slip who perhaps overawed by the opportunity ‘muffs’ the chance.  The spell is broken.  MacDonald senses the change too.  But no-one on the ground knows exactly what is to come.

‘When it does happen no mortal could have foretold it,’ writes James.

‘Constantine takes a long stride with his left foot across the wicket and leaning forward glances MacDonald from outside the off-stump to long leg for four. Pandemonium.’

The same intoxicating uninhibited joy was induced by the batting of Surresh Raina  at Dharamsala this Sunday when, after  Ramish Powar’s pure and extreme off-breaks had placed the Superkings under the cosh and in danger of being shunted out of the tournament, Raina began to chase down the Kings XI Punjab’s total; not with slogs but with pure stoke play that rivaled Powar’s deliveries for purity of form.

Back in 1932, MacDonald, the experienced campaigner does not lose his rag but comes in again with that ‘machine-like run’.  Nor does Constantine repeat the stroke immediately.  He waits a few balls before leaning forward and again putting the bowler away to fine leg from outside the off-stump. 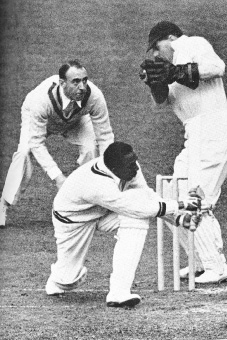 Classical Jazz - is this the shot whose development James describes taken back into First Class Cricket?

‘In these two stokes,’ writes James, ‘there was not the slightest recklessness or chanciness.  The unorthodoxy was carried out with a precision and care fully equal to the orthodoxy of Mac’s classical action and perfect length.’

James reaches for the work of Sir Donald Tovey to explain what was happening.  ‘The control, the mastery, the balance between means and ends which we call classical, these Tovey attributed to the fact that the material that the classical artist handles is traditional.  The Romantic was faced with material outside of the traditional. This necessitated new methods but not romantic methods.’

Just as Tovey believed that the great Romantics invented new means that were perfectly adapted to their new ends, that the only applicable word was classical, so James believes that Constantine’s new leg glance from outside off-stump was a classical shot.

‘Batting will handle new material (if it is new) with classical perfection but only if it is compelled to do so.’  This was the challenge that League cricket provided Constantine.  It was not his West Indian flare (a romantic notion) but his West Indian brain that worked out a new and safe way of countering new demands set by the bowler.

James asserts that Constantine took these new classical strokes back to Test cricket. He passed his legacy to Weeks and Worrell and Walcott and they to Sobers and he to Richards and Richards to that other Richards.

Third Man can remember to this day the first time he saw Barry Richards in a limited overs match calmly break the spell that had pinned every batsmen he’d ever watched before to a leg or middle and leg guard, and, well before the delivery was bowled, step across to a new position outside off-stump and guide the ball for four to long leg.

‘Swimming in the caves of league cricket between the wars, to this day dark and unfathomed, Constantine strengthened and flexed his strategic muscles,’ concludes James.

As far as Third Man is concerned, you can keep the powerful batsmen whose edges and mistimed shots carry the fence.  You can keep your Haydens and Symonds.  Just give him the chance to see Sachin Tendulka and Raina, their brains working out new and safe strategies, chasing down the runs.

Because Tendulka and Raina among a few others are the heirs to the classical tradition.  May their legacy enrich all cricket.