A Life in Dentristy or A Life in Cricket – You Decide

George Headley was born in Panama in 1909.  He was taken to Jamaica as a Spanish speaking ten year old.  There he fell in love with cricket.  At 15 and still in the then customary short trousers, he saw Earnest Tyldesley make over three hundred runs in a pre-season match.

It was as if he had learned all he needed to know about batting on that day suggests our old friend C.L.R. James.  (An urgent but unanswerable question arises; did Tyldesley use the Circle Line back lift?)

Destined to go to American to study dentistry George was saved for a future in cricket when he was chosen to play against a visiting English side captained by Lionel Tennyson.  He scored 79 in the first match and 211 in the second. 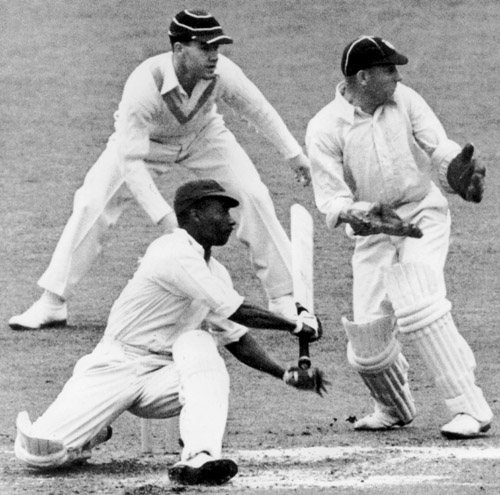 Two reasons to be thankful George Headley never got to handle a dentist's drill or our first clue that there is something very odd going on with the grip.

Headley played 22 times for the West Indians and often had to carry the rest of the batting.  This led to his nickname;  ‘Atlas’.  He scored 2,190 runs, ten centuries, eight against England, and averaged 60.83.

Aged only thirty, war intervened cruelly in his career surely taking away his best years as a batsman.  By then he had scored 9,532 first class runs.  He added only 391 runs when cricket resumed after the war, finishing with a first class average of 69.86.

Like David Gower,  Headley was light framed and had a well trained eye, quick feet and good timing.

The first shot we see him play in Part One of the ESCN Legends video at Cricinfo is a sumptuous on-drive played on the walk in a manner strikingly reminiscent of Vivian Richards batting forty years later.

(If you have only two minutes to spare, Third Man urges you to watch that one shot rather than to read on here)

The quality of this on drive is even more significant because, on Headley’s first tour to Australia it is said he was ‘worked out’ as an off-side player and the bowlers attacked leg stump with some success.  George went into the nets and fixed the problem so effectively that, by the end of the tour, Clarrie Grimmett  was saying that George was the best leg-side player he’d ever bowled to.

But the comparison Third Man wishes to explore is that between Headley and Bradman’s grip pictured below and their rather circular back lifts.

Aplogies for the blurred photo of George but TM has found it hard to find anything but a very small photograph of his stance. Note the way the bat faces inwards which means that the hands are further around the back of the bat with the thumbs of their bottom hands facing in the same direction as the face.

Now is the time to get that old bat out from under the stairs or the kit bag out of the car and see how you get on holding at bat like these two remarkable batsmen.

And tomorrow, all things permitting, let’s see whether we can work out what it meant for the way they played so well.