Taking it on the chin.

Recently Peter Roebuck recalled captaining Somerset when Neil Mallender bowled the last over of a match, much reduced by rain, to Glamorgan’s Ravi Shastri.  Usually Mallender landed his yorkers well, but on this occasion two of the deliveries were lifted over the long-on boundary.

‘As we trooped disconsolate from the arena, the cover fieldsman came across and remarked how interesting it had been that Shastri had taken his stance a foot inside his crease. Suffice it to say that captain and bowler pointed out how much more helpful this comment would have been two minutes earlier,’ writes Roebuck.

Another helpful thing to be told by those with a little more knowledge than you was that Andy Roberts had a very quick bouncer and then … an even quicker bouncer.  The first you hit for four, the second hit you for six.

At Southampton in June 1974 either no-one thought to share this information with the young Somerset cricketer playing up in the 1st Team from the IIs or the old pros were having a laugh at his expense.  Whichever, the eighteen year old’s eyes duly lit up (briefly) when he saw the second short ball from Andy Roberts coming towards him. 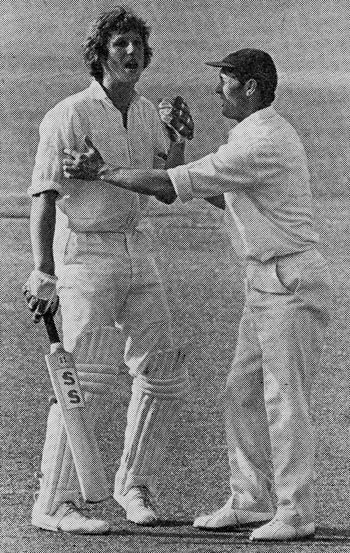 At the fall of a wicket, Botham bravely returned to the field and by doing so initiated Somerset’s love affair with him.

This fate also fell to Vijay Madhavji Merchant  forty years before.  Merchant was playing for Bombay Presidency against Douglas Jardine’s M.C.C side and facing Nichols, the Essex fast bowler, when he was struck by a ball that badly split his chin and he too had to be led from the field.

In the dressing room a doctor patched him up and, refusing to let him look at a mirror (still called a looking glass in those days), sent him back out to resume his innings.  He stayed three hours and, to borrow the period expression used by Wisden in its 1938 Cricketer of the Year citation, ‘took out his bat’ for 67 not out.

Wisden goes on, ‘Prior to that game Merchant, as he himself admits, felt a slight apprehension in facing fast bowling.  Since, he has feared no bowler, and this is how the transition occurred.’

Overcoming slight apprehension, Merchant seems to have learnt to appreciate chin music.  Not knowling any apprehension in the first place,  Botham became a rock and roller.