Besides Runs and Wickets

“There is an element of the heroic in cricket which is not found in other games, at least so it strikes me.  I can imagine Agamemnon, Achilles, and their peers not unbecomingly engaged in a cricket match.  Cricket is worth working at and thinking about … (We) should try of (ourselves) to find out what there is in cricket besides runs and wickets.  There is much indeed.  There is a charm that is too subtle to be thought out and expressed, though it can be felt and enjoyed.”

With a shirt of Indian Silk

Ranjitsinhji wrote these words in his Jubilee Book of Cricket a hundred years ago.  It was a book with which a keen young person and a parent or two without ever having played cricket themselves could learn the game from scratch.  Many bought it and did so.

Ranji had taken this path himself.  He was born in 1872 in the village of Sarodar, Nawanagar, the adopted son of His Highness Vibhaji, Maharaja Jam Saheb of Nawanagar and therefore ‘a scion of one of the oldest clans in the world’.

He was educated at Rajkumar College which seems to have many parallels with Millfield – founded for the education of Indian Princes with an old Cambridge Blue for a Principal who, in 1888, took his pupil on a visit to England and in particular to the Oval to see an Australian team that included McDonnell, Turner and Trott.

At Cambridge, it took Ranji three seasons to get into his college XI and a further year to be accepted for a trial for the University side.  The fact that ‘having broken through’ he played in every subsequent match would indicate that he spent a good deal of the first few of those years learning to play (working and thinking about the game) and the remaining years discriminated against. 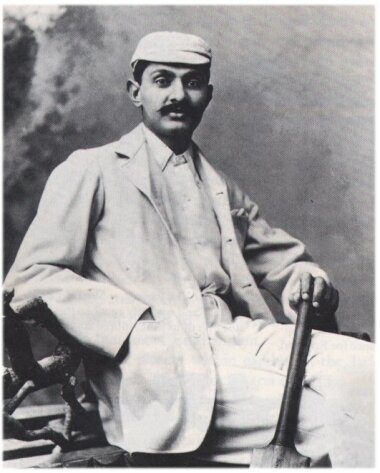 The profusion of runs that he had scored was put down to the poor ‘third class’ quality of the bowling, but the wealthy Ranji had paid some of the best English professionals to bowl to him.

Of Ranji in 1893 McClearly describes ‘a slim, lithe figure.  On the field he wore a shirt of fine Indian silk which rippled in a fascinating way when he moved.  He fielded at short slip and made wonderful catches.  (A sign of a great eye, TM) He was not then the powerful hitter he became in later years; he scored most of his runs by late cuts and his own exquisite leg glance; but the grace, ease and finish of his play were delightful to watch.’

Yet in that record breaking year of 1896, the MCC selection committee failed to include him in the side for the first Test against the visiting Australians to be played at Lord’s on the grounds that it doubted whether an Indian could be properly included in an England representative team.

England relied on only three front line bowlers. Australia won the toss and scored 412 on an excellent wicket for batting.  They then bowled England out for 231.  Ranji all but top scored with 62.  England were asked to follow on and had lost their fourth wicket at 109, by the close of play, still 72 runs adrift.

The third day looked no more than a formality for Australia and, when England’s sixth wicket fell at 179, they were still two runs behind.  But the 23 year old debutante was still in, having reached 50 in 85 minutes.  And on he went, whipping the straight ball to leg in a manner not seen in Test cricket before and describe as ‘amazing’.  All that work and thought having paid dividends.  Practice and think, practice and think.

Australia went in at 2.50pm needing 125 to win.  For just over three hours Richardson bowled unchanged, taking 6 for 76 in 42.3 overs before Australia limped over the line with three wickets to spare.  [85 overs in 190 minutes!]

Yes, there is more to be found in cricket besides runs and wickets.  In the life and play of Ranjitsinhji we find ‘a charm that is too subtle to be thought out and expressed, though it can be felt and enjoyed’.