Compare the Drives No.10 – Khawaja and Jackson 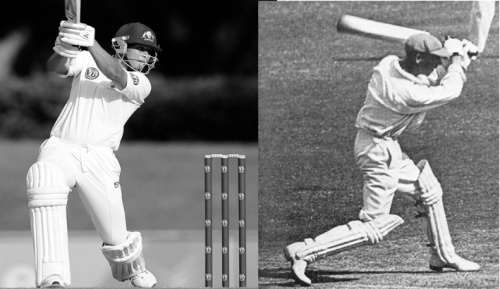 Did A.A. (Archie) Jackson manage a snooze before he came out to play his first innings for Australia?  Usman Khawaja did just that during the lunch interval immediately prior to taking guard on day one of the final Test in Sydney a few hours ago.

There are some parallels, not least in importance being first deliveries after lunch breaks, the first in Test cricket for Khawaja and for Jackson … well let’s come to that in good time.

'Truth is Beauty'. There are no known imagines of Keats playing cricket. If there were ...

Like Usman, Archie was not born in Australia.  He was a Scotsman from Rutherglen in Lanarkshire.   He arrived with his family in Balmain, Sydney as a 12 year old in 1921.

Like Usman, Archie also played for New South Wales, where he began his  first class career at the age of 17.

He toured New Zealand with Australia a season later and received his cap as a nineteen year old against Chapman’s MCC side in 1929.

The parralels continue as Jackson  was brought into the side to replace a great star and team fixture, in his case V.Y. Richardson.  Australia were then as now being forced by retirements, injuries and age to rebuild their team.

Their situation was even worse.   They were three nil down in the series  and no less under the cosh off the field, where the Australian press and supporters were giving them as good a bashing as their opponents.

Third Man has described the three previous Test in the series, all won by England at Brisbane, Sydney and Melbourne.

In the fourth Test, At Adelaide in the first week of 1929, England batted first  and when Hobbs and Sutcliffe had taken the score to 143 it looked as if Australia were yet again rolling over in front of  the English juggernaut, but beautiful bowling by Grimmett (52.1 overs 12 maidens 5 for 102) kept Australia in the match despite yet another undefeated century by Hammond.

Bill and an apprehensive Archie already haunted by the illness that would kill him two and a half years later at the age of 23 walk out to bat during the 1930 tour of England.

Jackson walked out to open the batting with Woodfull but in the flash of an eye Australia were 19 for 3 with Tate, Larwood and White doing the damage.  England’s 334 all out looked a very long way off. It is not hard to imagine the invective from the crowd and estimate the intoxicating mixture of tension and self-belief experienced by Jackson.

Third Man does not doubt that Archie like Usman after his knock today would have described his first experience of Test match batting as ‘fun’; fun, fun, fun.

Archie’s, though, was a much more extraordinary baptism as, joined by his captain J. Ryder, he proceeded to give an apparently nerveless exhibition of brilliant stroke play with delicate glances, wristy cuts and searing drives all made under considerable pressure from good bowling.

Heel raised and ready to play the spinner late

This photograph (right) hints at the lightness of his footwork.

J.C. ‘Farmer’ White the Somerset slow left armer had manacled the Australian batsmen throughout the series, bowling shorter and flatter deliveries that were hard to get away and which bought time for Tate and Larwood to recover in the intense heat.

But Jackson was the first Australian in that series to ‘jump in’ to drive White in the grand manner of a Hobbs (see Jack, How Did You Do That?) or, whispering it carefully, the young man’s hero, Victor Trumper.

At lunch on the third day Jackson had painstakingly taken his score to the precipice that is 97.  As the players resumed the field, Chapman called back a refreshed Larwood to the attack inorder to squeeze every possible ounce of potentially paralyzing anxiety out of the situation. 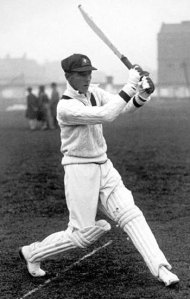 Top of the handle and a very straight front leg.

The Nottingham Express himself describes his first ball after that lunch break, eighty two years ago.

“With 97 runs against his name and having had his back to the wall, he cover-drove me to bring up his hundred.  That ball was delivered as fast as any I had ever bowled previously.

“That glorious stroke has lived in my memory to this day for its ease and perfect timing.  I am sure that few among the many thousands present sighted the ball as it raced to the boundary.”

Today, England were probably very glad to see the back of Usman Khawaja, sweeping against the turn as (urgh) young men are tempted too easily to do.  But England in 1929 had to wait until Jackson was 164 before he was lbw to White.

What are the odds that he too was sweeping against the turn?