Winners and Spoils or “Where’s the Entertainment in Winning?”

The object of cricket is to beat the opposition.  There are many ways that playing or watching cricket can be enjoyable or entertaining, but, especially at the highest and most competitive level, winning the encounter is 99% of it.

But victory’s capacity to instil joy decays at break-neck speed.  So, when Andy Flower took the England side out into the middle of a deserted SCG – exercising the visceral and territorial rights of the victor – he will have reminded them that success is a transitory experience best savoured in the ‘now’.

In urging the side to relish their combined achievements, Flower and Strauss will already have begun the process of fostering the sense of ‘us’ against an unjust world that will fortify the side for the next contest and the next after that.

Douglas Jardine did just that when he was given the job of leading England back to Australia in 1932.  He never forgot and never allowed his side to forget the treatment that Percy Chapman’s 1928/29 side received during their triumphant series when the players’ combined and individual merits were belittled.

Hammond with a Test match aggregate of 905 runs was dubbed a ‘one stroke player’ and Larwood, whose pace had already exposed weaknesses in the Australian batting, was dismissed as no match for Gregory.

The reaction of the crowds had been directly hostile.  During that Sydney Test fights broke out on the Hill, the barracking never relented, especially of wicket keeper Duckworth after he was involved in a controversial decision.

Some say that Bodyline resulted from a determination to remove the threat of Bradman, but it was much more than that.  It was a psychological ploy to bolster Jardine’s concept of Total Cricket. 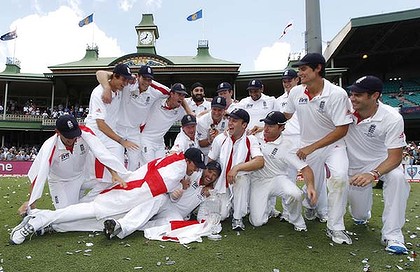 To the Winner the Spoils

Today the slurs are subtler but no less unworthy.  “England aren’t a brilliant team – just good at what they do. Where’s the entertainment in that?”

As one Australian blogger summed it up, “What makes them good is not necessarily what gets you excited about cricket.  If they’re your team, you don’t care how they win, but for the rest of us, Australians and everyone else, this was a long series, filled with well drilled quick singles and bowling units combining.”

Smeared as unprofessionally inept in 2006/7, today they are scoffed at for being too professional.

Because cricket is monetised more sophisticatedly than ever before, the cash value of prominent England players is chalked up for all to see at the IPL auction mart.

The worth of showman Pietersen is downgraded from £800k to £400k.  Western pin-up Broad is sold for just £250K. Anderson who was arguably the man of the series has no value, nor do the equally effective T20 cricketers Prior, Bresnan and Swann (though all may have misjudged their reserve pricing tactics and should question the expertise of their agents.)

Albion Resurgent will never be a popular show, but watching skilful swing bowling, secure fielding, adept batsmanship and life affirming teamwork was a great pleasure.  Different tests now await England, but it is heartening to hope that the reaction of their opponents can make even a victor stronger.

Of all the different ways of experiencing the Ashes …

Filed under Just a quick brush

From an early age those who go on to play cricket learn the difference between catching a ball on the way down and a ball rising as a half volley from the ground.  The two have a totally different feel on the hands.  Cricketers can tell with their eyes shut.

Similarly, but from a not quite so early an age, a batsman learns the feel that comes through the bat when he has edged the ball. There is no mistaking that sensation of ball on bat, however faint. It is totally different from the feel from a bat having clipped his pad or his foot on the way through its swing.

Both Hughes and Bell also gave the game away in their body language and ill-disguised hesitations when questioned by team mates or interviewers.

These are professional sportsmen who almost daily risk losing their livelihood, especially in the early stages of their careers, at the hands of poor umpiring decisions augmented by the ploys of their opponents.

That is why there are umpires.  It is why the game must give them every possible technical aid as quickly at their disposal as technically possible.  Why administrators and referees must come down hard on any action that seeks to influence or pressurise the decision taking.  And why there must be no toleratation of descent once a decision has been made.

Professionalised cricket is an industry. In each match there are in the region of twenty five small firms ‘in play’.  If the chairman and chief executive of one such firm stands, rather than walks, claims falsely, rather than fesses up, we should not be surprised.  It is a business decision.

But there is a place for ethical self-respect in business and in life.  The choice is with the individual.

Meanwhile Bell demonstrated the kind of batting described here yesterday with back foot shots played to the rising ball through a full arc around the field interspersed with sumptuous front foot drives that threaded the field. His balance footwork and timing were magnificent. 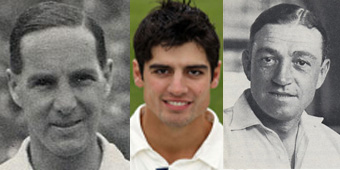 A compilation that in early November might have struck the reader as bizarre.

At close of play, Cook confided to an interviewer that, batting the way he has since Brisbane, there have been periods when, as for a Zen master encountering the sublime, time passed in a blurr.  ‘Is it really effing drinks already, mate?’.

It was meet therefore that his 189 took his series total beyond that of Herbert Sutcliffe’s huge achievement in the Ashes of 1924/25.

Cook’s total is still some way short of W.R. Hammond’s 905 [at an average 113.12] made in 1928/29, which fact underscores Hammond’s achievement and in no way diminishes that of Cook.   1928/29 is still the closest template for this series that sadly for England supporters is drawing to its close.

Preparing the Wicket at the Cricket Ground, Sydney, 1912 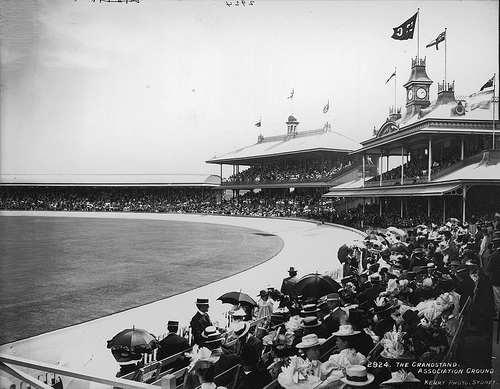 As we wait for the start of the 5th and final Test of the 2010/11 Ashes series to be played at Sydney it is possible to skip into the Mark III Time Machine to view the beautiful Edwardian, Association Ground pictured above.

The track around the playing field is a talking point for all those interested in boundaries and the definition of boundaries.

On the 9th November 1911, soon after MCC arrived in Adelaide for the first match on that winter’s Ashes tour to be played against South Australia, C Hill the Australian captain presented the touring captain P.F. (Plum) Warner and the team manager, T Pawley, with a list of 11 alterations to the playing  conditions for the coming Test matches.

At that time, Australia was the only country in the world where the laws of cricket as drawn up by MCC did not apply.  The proposed alterations could easily have been sent to the MCC in advance of the tour but the Board of Control were making a strong point about their independence, and besides these had been the rules under which Australia and South Africa had played the year before.

And the track? Alteration 3 Boundaries stated that ‘The batsman shall be caught out by a fieldsman if the fieldsman is at the time on the asphalt track surrounding the playing ground.  Other hits on to the track, would of course, be boundary hits, counting four runs.  Hits over the ropes or pickets placed as in Inter-State matches shall count six runs.’

Alteration 5 Rolling the Wicket also gave the MCC tour management some concern. ‘In the event of rain during the day the ground-man shall cause the wicket to be swept and rolled for not more than ten minutes after the close of that day’s play at any time that night, or on the Sunday night up to twelve o’clock midnight, whenever he is of the opinion that such rolling will improve the wicket, and he will use such roller after consultation with the two captains as he thinks best calculated to produce that effect.

‘This sweeping and rolling shall not affect the right to sweep and roll provided for in the MCC rules.’

Even after three visits to Australia Warner could never fathom out the rules concerning rolling especially when the variations of practice left him entirely in the dark.

Warner did however take a particular interest in the way Australian wickets were prepared.  Here is a letter which was sent to him during this tour by W.J. Stuart the Sydney Cricket Ground’s Caretaker.

DEAR SIR, The following is the process usually adopted in preparing a wicket for a first class match.  About a week before the match starts, the grass on the piece of ground selected for the pitch is mown as short as possible, and the ground well watered, the water being allowed to run until it lies in a sheet on it.  While the ground is still moist, but with no water lying on it, a roller weighting about 3 cwt is used until the surface begins to ‘work’, as it is termed.  The object being to drive the water into the most impervious Bulli soil.  After this process, which usually occupies about half an hour, the pitch is well sprayed with the hose, to wash the mud which has been worked up, down around the roots of the grass.  It is then left until it is free from any stickiness, and then a roller weighing 35 cwt is used until the pitch is perfectly smooth.  As soon as cracks begin to show, which is usually on the following day, the heavy roller is again used, which closes them up.  From now on, it is rolled with the heavy roller, for about half an hour each day, until the start of the match, by which time it is almost hard, and impervious to water, as a brick. 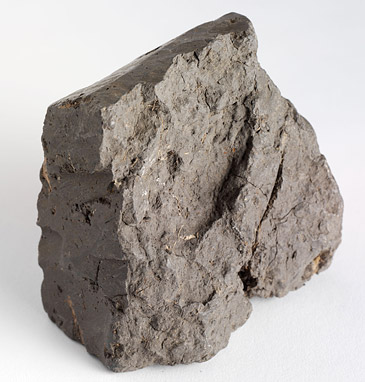 Bulli soil, mined from the base of the Illawarra escarpment, has been used for the Sydney Cricket Ground pitch for over 120 years. In the 1920s the groundsman, Bill Stuart, looked for alternative sources as Bulli soil was sometimes difficult to obtain. Stuart used Hamilton soil for the pitch in the early 1930s. This sample was probably souvenired from the soil used to dress the pitch for the ‘Bodyline’ series — the English Ashes tour of Australia in the summer of 1932–33.